Last weekend, I participated in the ACT (Autism Care & Treatment) Today! for Military Families 5k/10k in Fiesta Island (Mission Bay).  I did the 5k last year and I really like the cause that this event supports, so this race was a must-do this year!  This time was a little different, I completed the 10k (my first!) and I joined a team (Stroller Warriors) – which made me both excited and nervous. This race also puts out various promo codes leading up to the race, so I paid around $29, which is a pretty good deal for a 10k. I knew completing my first 10k would be much more enjoyable in the company of supportive women that I run with all the time…but I also didn’t train as much as I wanted – so the lingering thought of running 6.2 miles with a stroller was a bit overwhelming.

There were two options for packet pick-up – the evening before the race at  Woodstock Pizza in Pacific Beach or the morning of the race – I opted for the morning of.  The race started at 7:30am so I was up pretty early since I was bringing my 3-year old along for this ride.  We left on time (and by on time, I mean 10 minutes late – which is about normal for me) and found a parking spot a little less than half a mile from the start line.  Since I did this race before,  I remembered that the later you arrive, the further away you will have to park since it’s mostly street parking.  I really didn’t mind the warm-up though and it helped me get mentally prepared for the day.  However, what I did NOT prepare for was the rain!  This is Southern California people – it’s not supposed to rain – like, ever.  But lo and behold, here we are, on a cold (60-65 degrees) and rainy/drizzly early morning.  Luckily I brought an extra blanket for my DD (that’s darling daughter in case you aren’t down with mom lingo) and she was so sleepy that she didn’t even really notice the weather conditions.  Everything in me wanted to turn around and go home, but I knew that a group of Stroller Warriors would be waiting and ready to go, so I pushed forward and made it to the registration table to pick-up my bib number, chip-timer, and t-shirt.  Side note: I was pretty impressed with the t-shirts this year, they were a dark blue color compared to the grey color they were last year.

Then,  I headed over to meet up with the other Stroller Warriors.  Because we had around 35 members on our team, we received two tents with tables, chairs and snacks.  This was really nice because it gave us a place to all meet up before and after the race (since some of us were running the 5k and some the 10k).  The location of our tents was also close to the bounce house area, which was extra convenient so we could all watch the kiddos.  So moving on to the race!  Here we go! 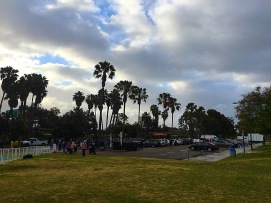 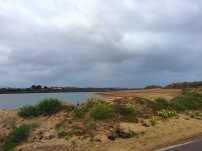 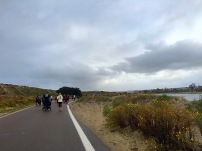 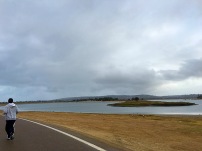 I wish I had some really amazingly, beautiful pics for this race – but it was gloomy and drizzly the whole time so I didn’t have a lot to work with.  The 10k started 30 minutes before the 5k and I started near the back of the race since I knew I might be a little slower with my lack of training and stroller-pushing.  Another thing I really like about this race is that there is a separate stroller division when it comes to results, so that us stroller-pushers have a fighting chance at receiving an award.  Course support consisted of a few friendly volunteers cheering along the way and about three water stations; however, no course photographers. 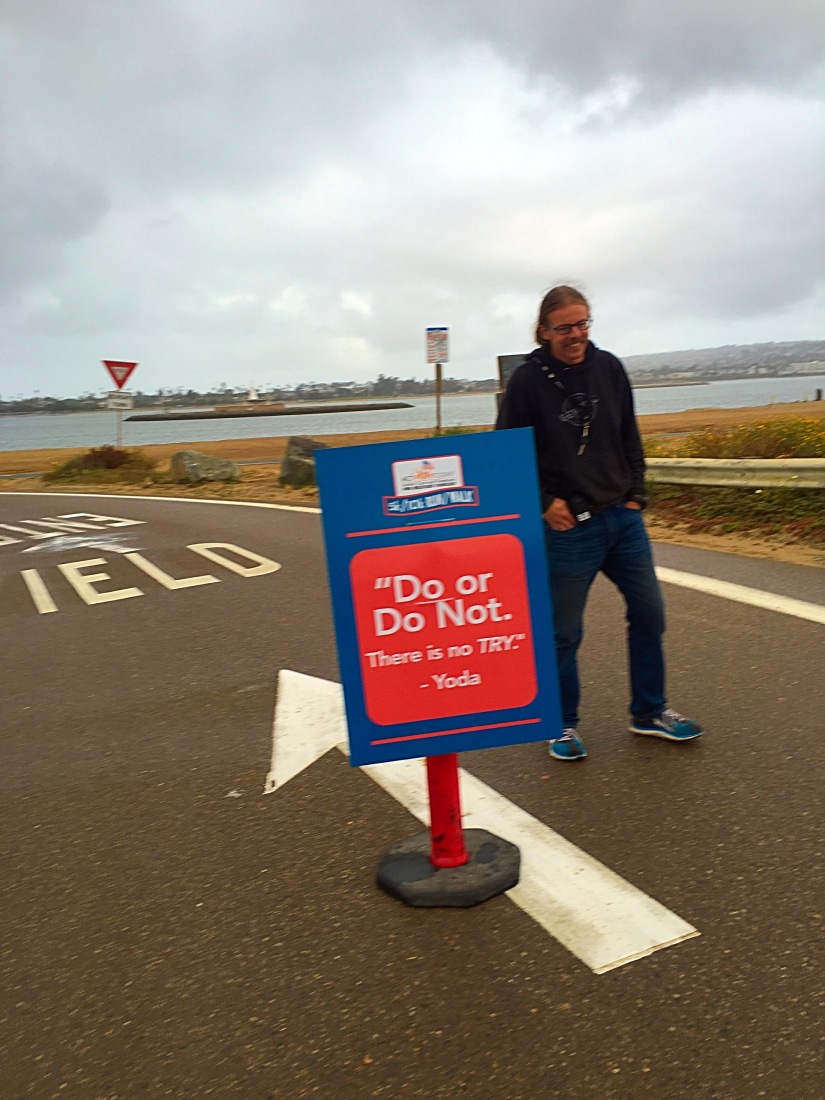 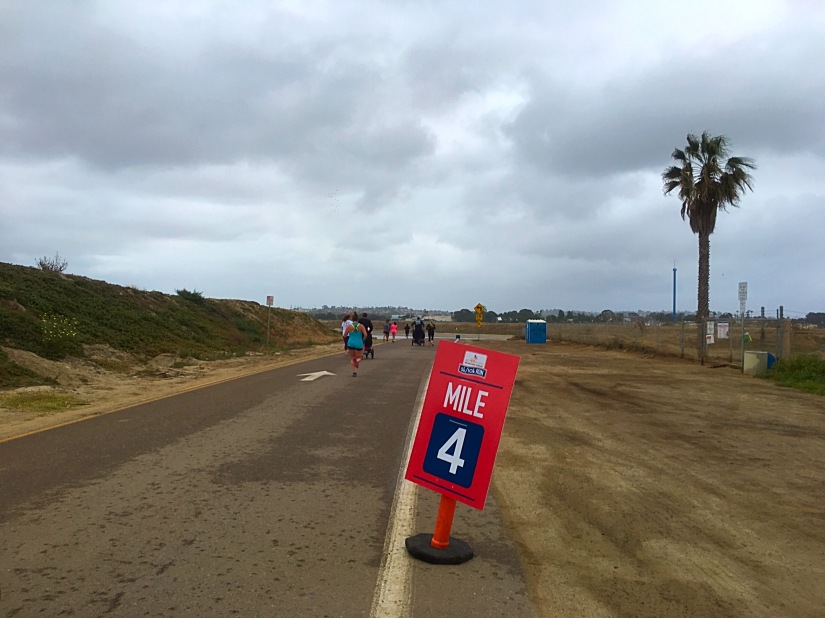 It was a pretty flat course the whole way, which is awesome for someone completing their first 10K and we were met at the finish with medals and water.  The DJ announced the runner’s name as they crossed the finish line – he got my name wrong, but whatevs…he tried.  See previous blog posts for my feelings on race DJ’s (hint: I kinda feel bad for them.).  I’ll also add that the race wasn’t overly crowded, which made passing and pulling over much easier. After the race, there was a big celebration catering to both kids and adults.  There were a ton of vendors, probably the most I’ve seen at any race – plus there were a lot of activities for the kids (I mentioned the bounce house earlier), a beer and wine garden, and a live band. And since this is an event benefitting autistic children, there was a quiet zone set up for children who may be sensitive to all of the noise and crowds which I thought was fantastic! 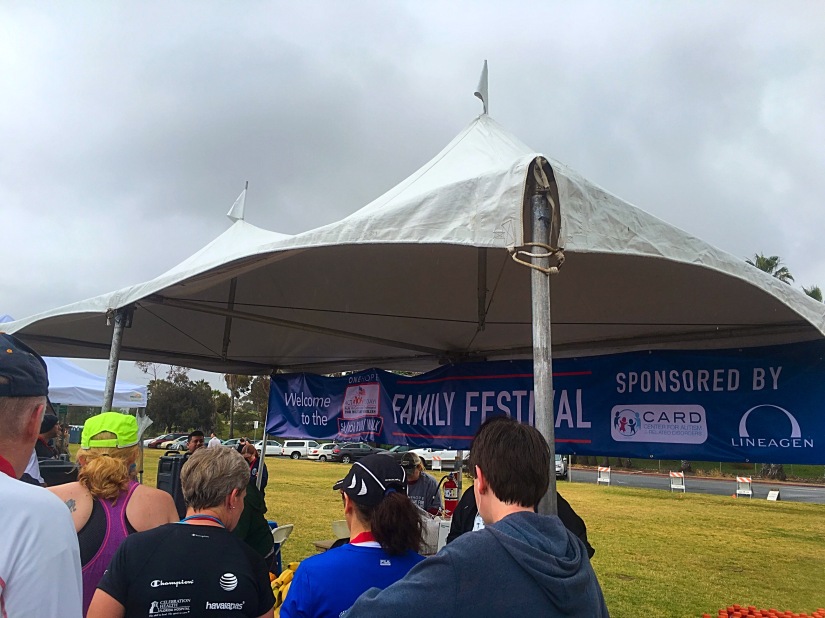 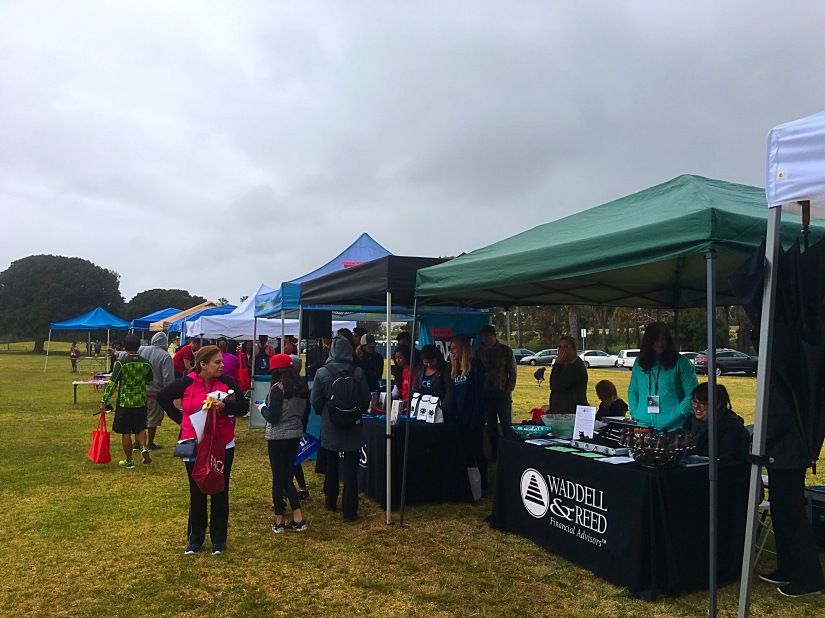 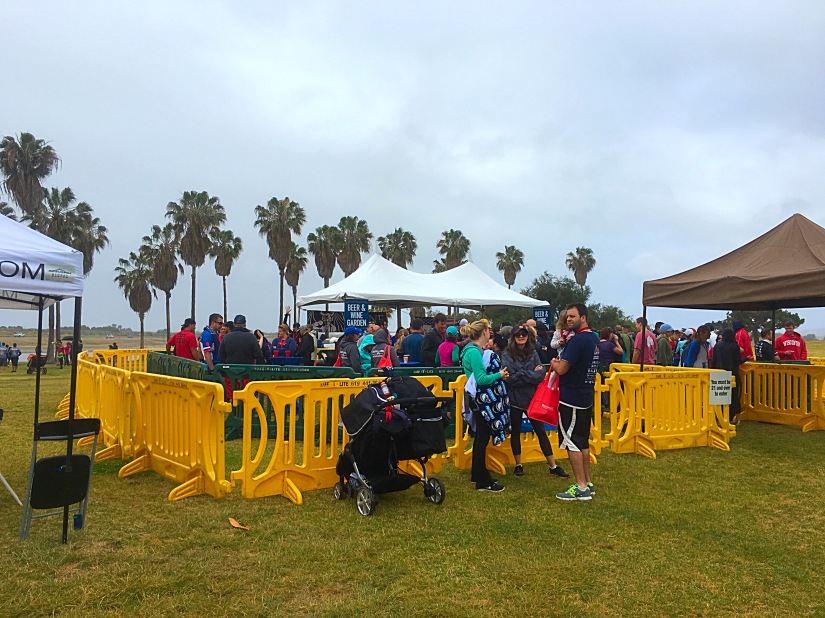 I didn’t checkout the beer/wine garden cause I was freezing and would have preferred coffee, but I heard mixed reviews on the alcohol selection so I assume it was just all a personal preference.  The race directors and volunteers were all amazing and super helpful.  At one point, I lost my medal 😦 but I told one of the volunteers and they gladly gave me a new one with no questions asked.  Overall, despite the cold and rain, it was really a great morning and I would definitely do this race again!  There are so many things to love about this race: The course, the price, the time of year (it’s not too hot yet), the course support, the sponsors, the vendors, free event photos, the children’s activities, the food, the music, the beverages, the medal, the swag (we will get to that in a moment), my amazing Stroller Warriors team, and above all else- the cause.  I think Autism awareness is really important, but being a military spouse myself I also like events that support military families- so this was all around a really great event! 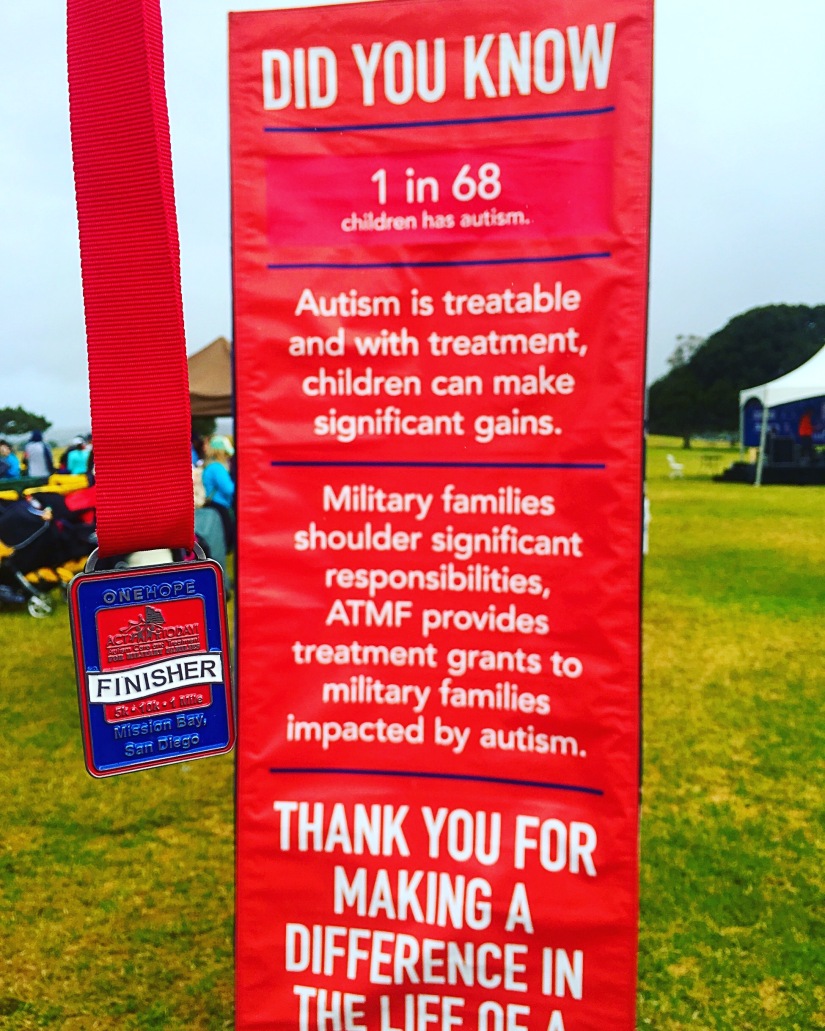 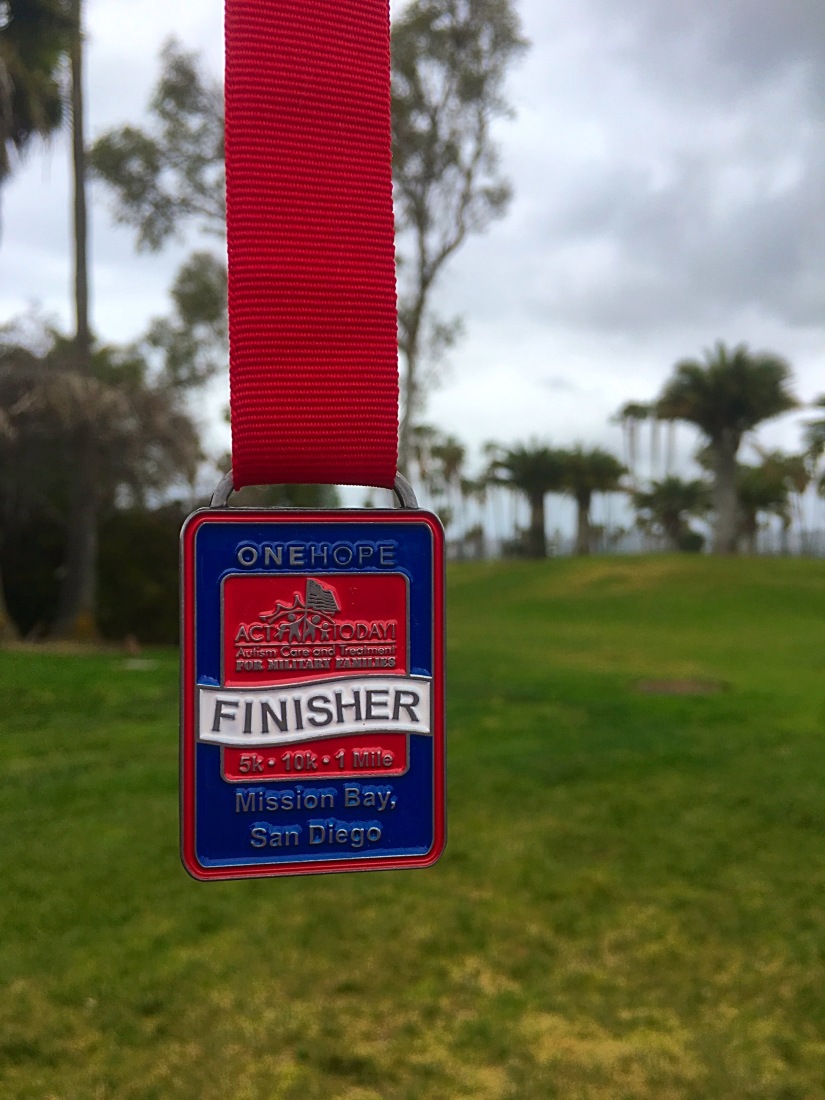 I already mentioned that I liked the shirt much better this year, but I also think the medal was better as well.  As for the swag, there is too much to list!  But they were giving away bubbles like crazy!  And not pictured, they gave out a lot of fruit, bagels, bottles of Gatorade and bottles of water.  All of the vendors were very generous and friendly.  They all engaged in friendly conversation and I could tell that they really loved kids.  They also were kind enough to give away tons of swag and coupons.  I cannot say enough great things about this event and I would recommend this race to anyone looking for a fun and family friendly run!  Thanks again to ACT Today for Military Families and One Hope Wine!

Also, shoutout to my awesome friend for snagging this awesome pic of me crossing my first 10k finish line! 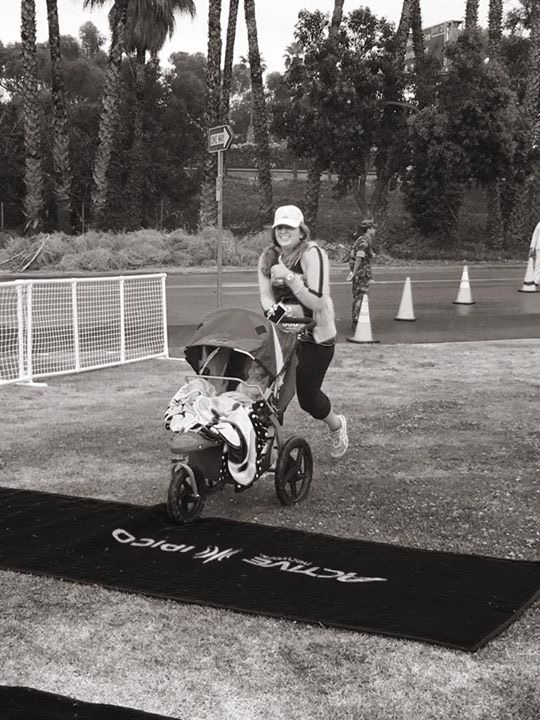 See you at the next event! 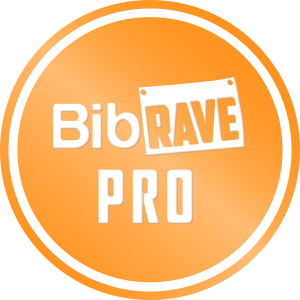