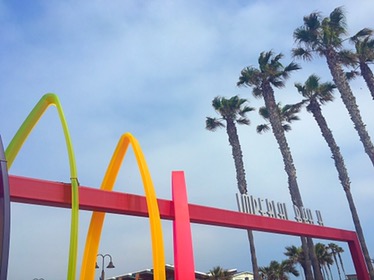 Last month I participated in the inaugural Imperial Beach 5k Beach Run.  I was little hesitant to register since it’s the organization’s first race and I prefer all of the kinks to be worked out before I participate in a race.  But they offered a promo code and a military discount so I only paid about $25 after the fees (darn you Active.com!)…and I always enjoy a nice run on the beach.  So I decided to go ahead and run this one along with a couple of friends.

If you’re wondering how close Imperial Beach is to Mexico, it’s this close:

I found free street parking fairly easy (the race started at 8:00 am) and I only had to wait a few minutes in the line to pick-up my packet.  The race was held on the actual packed sand of the beach and there were probably about 250-300 participants.  There was also a 1 mile fun run option for those not quite ready to tackle a 5k which meant there were two separate race courses.  The 5k race route was a bit odd to me – it was an out-and-back followed by another out-and-back.  We will get to the details on that later.  The terrain was sand (obviously) but there was an added hurdle that I did not take into account for this run – rocks.  There were rocks buried all throughout the sand, which made for an obstacle course that I was unprepared for.  It wasn’t too crazy, but since the beach was also kind of slanted, I had to pay attention a little more to my footing so that I wouldn’t trip or roll an ankle.  My friend pushed a stroller during this race, so it wasn’t an impossible feat – just a challenging one.  There was also a water station about halfway in and some volunteers directing the runners along the course. 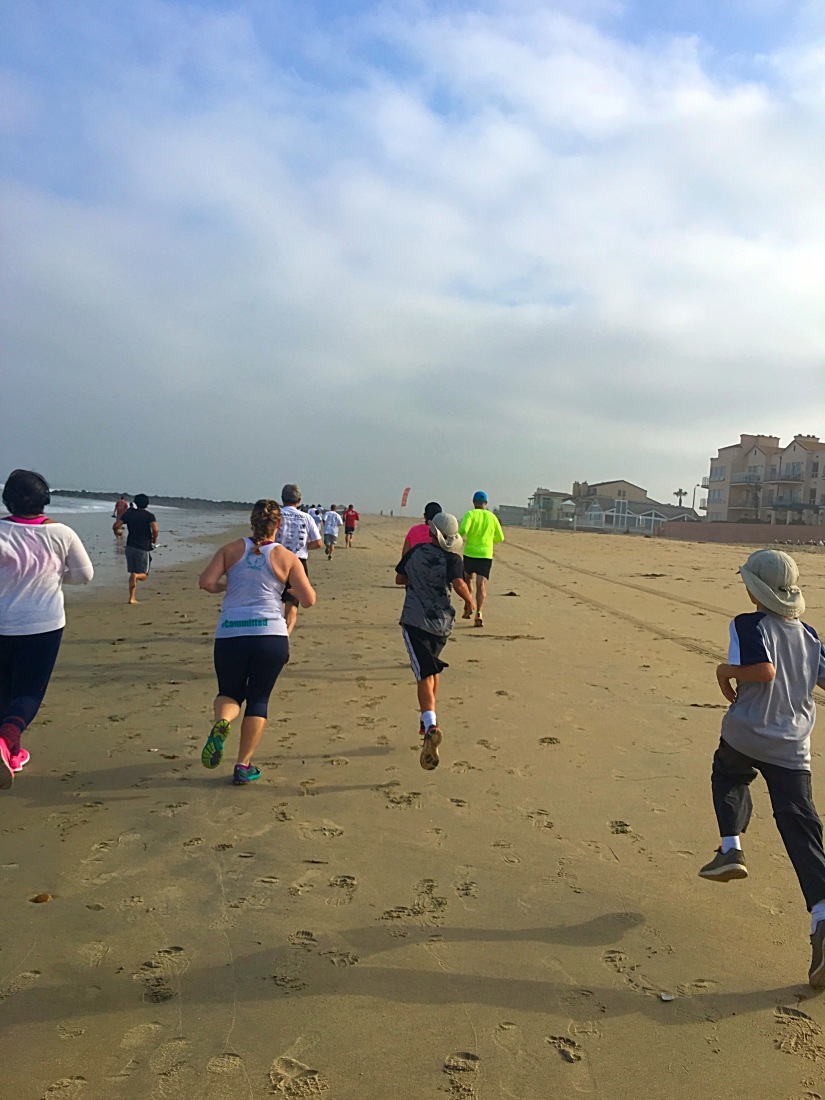 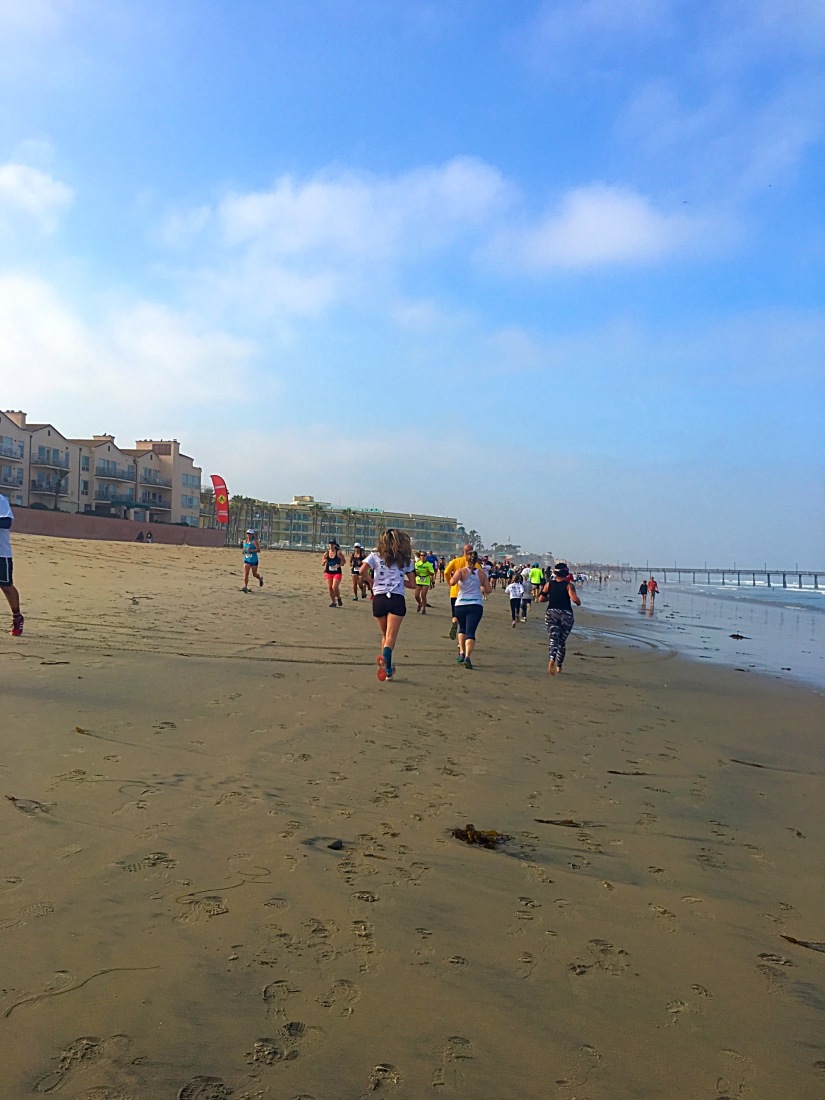 Note the rocks in the last pic and in case you’re wondering…no, I did not fall.  After the run there was a big expo with lots of activities for kids, including a bounce house and face painting.  There were also fitness demos, a band and free pancakes!  I would say the free pancake breakfast – which included, pancakes, syrup, sausage and juice – was one of the best parts of the event.  I have no pictures of this delicious ensemble because I consumed the whole meal in about six and a half minutes.  You’ll just have to use your imagination on this one.  I also thought the band was pretty great.  Since this event was held to benefit the Calvary Training Center in Mexico, the band played worship music but with a Mexican flare…and I totally dug it.  I didn’t bring my kiddos to this event so I can’t say I participated in any of the activities – but they looked fun and the bounce house seemed pretty rad.  There was also a raffle, but they weren’t doing the giveaways until two hours later.  In the words of the great Sweet Brown – “Ain’t nobody got time for that”. 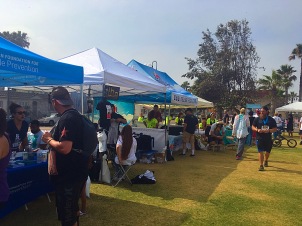 Participation medals were not given out at this race, but they were given to those who placed in the top three of each age group.  I ran with a fellow Stroller Warrior and placed first in her age group so I did hang around for the medal ceremony.

Now, back to the course.  There was a big issue that I had with the race course and that was the fact that it was NOT A TRUE 5K, which drives me crazy when races are not the length that they are advertised.  This one ended up being around 2.38 miles so there was obviously some miscommunication or miscalculation when the course was originally created.  I will give them a little bit of a slide since this was the inaugural race and like I said, I expected some things to not go as smoothly as they would in other established races.  However, since I did pay $25 for a 5k, I expect a true 5k.  Other than that, the views were beautiful and everyone was friendly; although I feel like all those people who placed 4th or 5th in their age group kind of got screwed since they would have had at least half a mile to pass the people in front of them.  Anywho, besides that hiccup I enjoyed the event and although I didn’t bring my kids this time I like that it was a fun event for the whole family to enjoy in beautiful Imperial Beach.

Aloe Gloe is a refreshing drink that comes in a few tasty flavors! 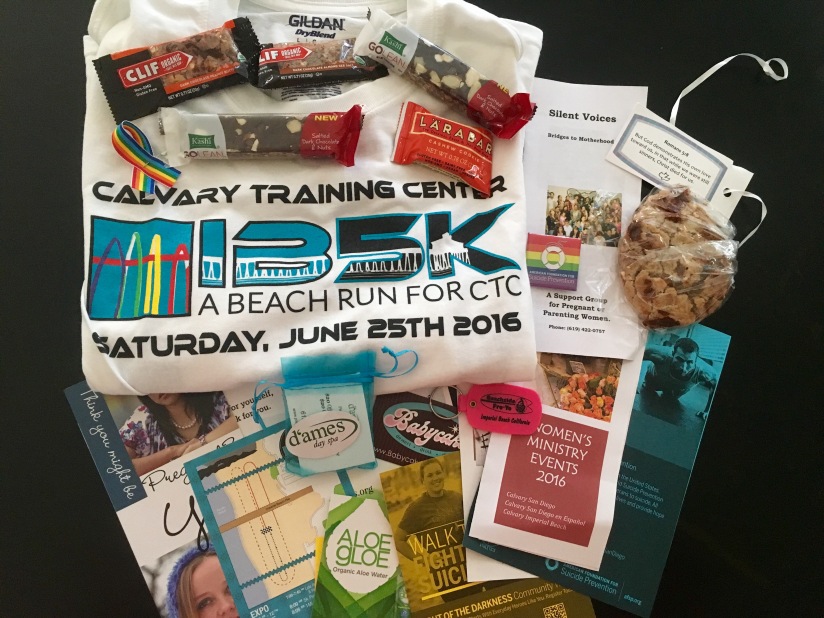 ~ A cotton tshirt – I love the design, but it runs fairly large so I’m not sure I will be wearing this one very often.

~D’ames Day Spa tube of something (not sure what this is as there were no instructions, perhaps a face scrub?  But it smells divine!)

~And Scenery, of course!

See you at the next event! 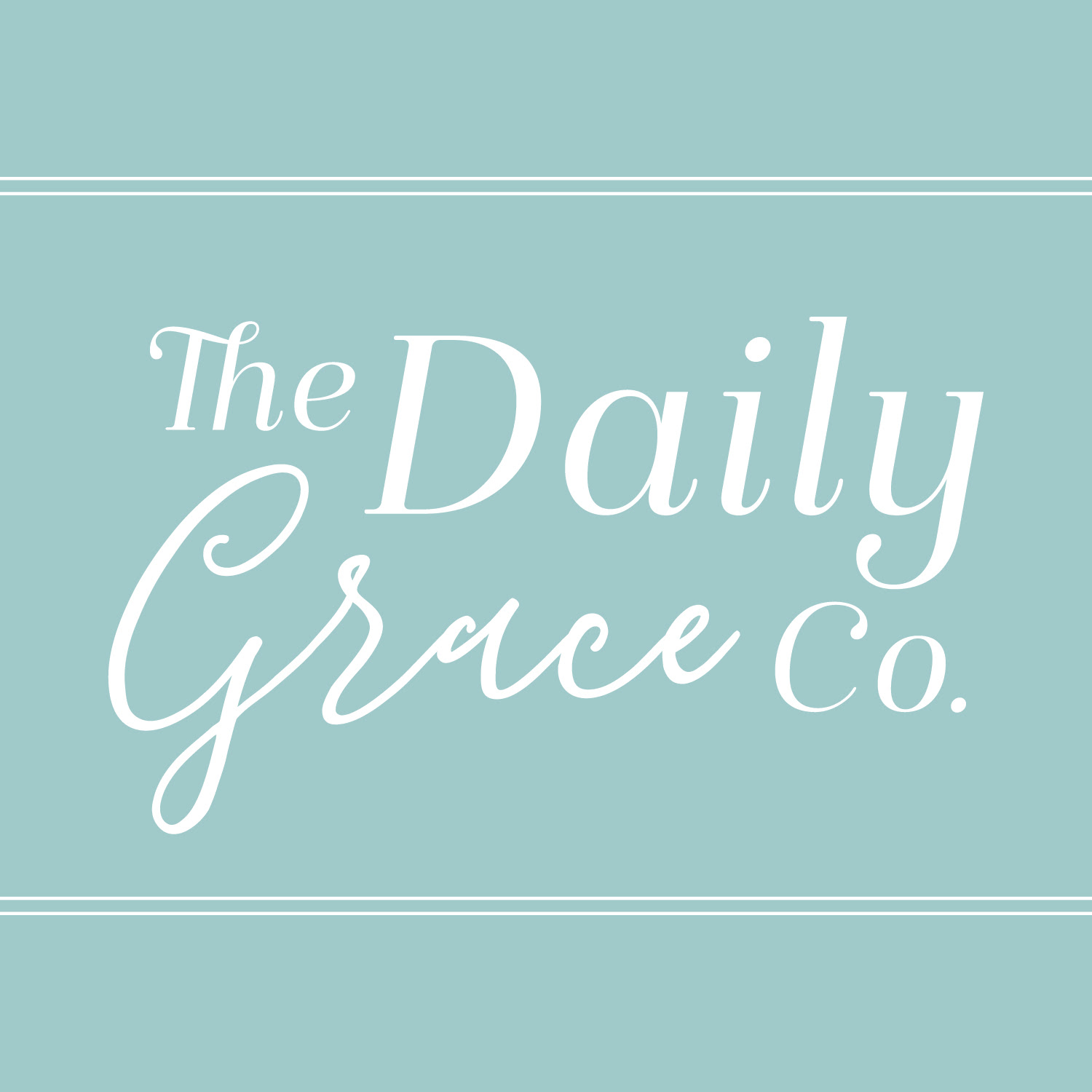